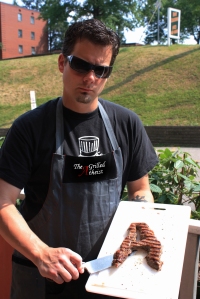 As you well know cooking, eating, and drinking leads to great conversation. And usually when I am at the grill with my friends, the same topics generally emerge. Science. Religion.  Politics.  Atheism.  So I got the idea to marry these two staples of my life.

I am a physician by trade, but on this site I will be sharing my musings on atheism, science, skepticism, religion, politics … and, of course, cooking. I do not claim to be a professional chef. I just love to cook and grill. So as I tell you how I feel about, say, Mormonism, I’ll throw in a recipe or two so that you can pay it forward to your friends and family. Cook for them. And have great conversation.

Who is The Grilled Atheist anyway?

David McAdams was born in Pittsburgh, Pennsylvania.  After high school he attended the University of Pittsburgh in the School of Engineering.  He decided to change career paths and major in Neuroscience instead.  After graduating he attended Georgetown University School of Medicine.  He then completed his residency in Internal Medicine at the University of Pittsburgh Medical Center.  He was the first Hospitalist at UPMC and helped to build the Hospital Medicine program into a large and successful venture.

Also during this time he found out that he had a penchant for cooking.  Not wanting to change careers or embark on the long and over-glorified journey to become a professional chef, he became satisfied with reading, experimenting, and running his own kitchen…at home.